Little Flower was established as a parish in 1948 with the Reverend Edward J. O'Brien as its first pastor. However, its history dates back to 1906 to a tiny chapel in rural Glen Echo called St. Agnes Church, which was in use for only a few years before the building was leased to the town.

In 1929 it was reopened as a mission of St. Francis Xavier Church in Washington, and was called the Chapel of the Little Flower. In 1931 it became a mission of Our Lady of Victory Church. The chapel was used for a few years after Little Flower became a parsh and the present property was acquired. It was taken down in 1960.

The "old church" opened in 1952 and is now the parish hall and school cafeteria. The school and convent were completed in 1953. The "new church" was completed in 1967 by the Rev. Msgr. Henry F. Graebenstein, who had become pastor in 1957, and was dedicated by Archbishop Patrick A. O'Boyle. The Rev. Msgr. Joseph B. Coyne became pastor in 1970. While he was the pastor, the gymnasium to the school was added. The Rev. Msgr. William J. Kane became pastor in 1994 and retired in 2004. In 2004 a new athletic field was built and was named for Msgr. Kane. In 2004 Msgr. Peter Vaghi became the pastor. In 2009, a new Casavant Freres pipe organ was installed in the church completing the original design.

The Little Flower, St. Thérèse of Lisieux, was born Thérèse Martin on January 2, 1873. She lived only 24 years, nine of them in the cloistered world of the Carmelite order. Nonetheless, she became known worldwide for her writings, collectively entitled Histoire d'une Ame ("Story of a Soul"), and she is a Doctor of the Church.

St. Thérèse enjoyed a quite childhood in Alencon, France. At an early age, however, her precocious intelligence and sensitive temperament revealed themselves. At the age of ten, she was cured of a mysterious illness when a vision of the Virgin Mary, smiling beautifully, appeared to her. At fourteen, she prayed intensely for the conversion of a condemned man. She was elated to learn that moments before his execution, he suddenly had turned and kissed the crucifix. Afterwards, she referred to him as her "first child."

Her entrance into the religious life at age fifteen was unusual even for the times. Her request for admission was denied first by the Superior of Carmel and then by the Bishop himself. Determined, she persuaded her father to take her on a pilgrimage to Rome. There she defied the strict protocol that required silence during an audience with the Pope pleading with him directly as she knelt to kiss his hand. In her fervor, she had to be dragged away from his feet. A short time later she received permission to enter Carmel.

"Histoire d'une Ame" was written at the direction of her sister, then Prioress of the convent. Initially, she asked Thérèse to recount the stories of their shared childhood. Eventually, as it became clear that Thérèse would soon die of tuberculosis, Thérèse was "ordered" to set down the essentials of her spirituality. At its heart, Thérèse's "little way" attempts to distill the love of God into its purest form - "the surrender of the little child who sleeps without fear in its father's arms".

A few years after Little Flower moved to its present location, the Glen Echo church ceased to be used, and was taken down in 1960. The crucifix was stored in the school and was used occasionally by the Knights of Columbus council that met in the hall. When the council dissolved in the mid-1970's, a parishioner who had many happy memories of being an altar server there in the 1940’s was offered the crucifix. Decades later, after someone showed him the article on Little Flower's altar servers in the Washington Post in 2005, and recalling his happy times as a Little Flower server in Glen Echo, he began to think that the time had come to return the crucifix to the parish.

The wooden, hand-carved crucifix looks home-made, perhaps by a parishioner, but the name of the artist is not known. It may date all the way back to 1929, when the former St. Agnes Church was reopened as the Little Flower Chapel.

Holy card for the first Masses celebrated in the present church, on 19 March 1967. From the effects of Sally Steele. 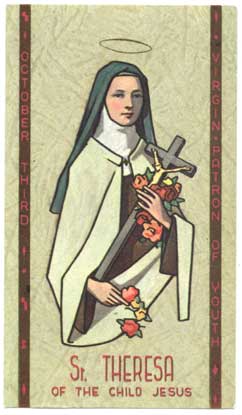 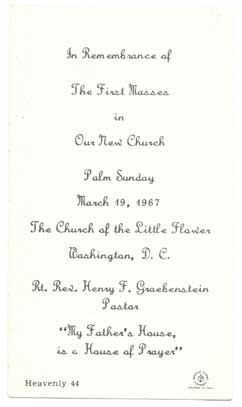 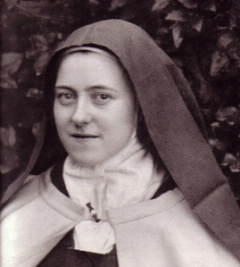